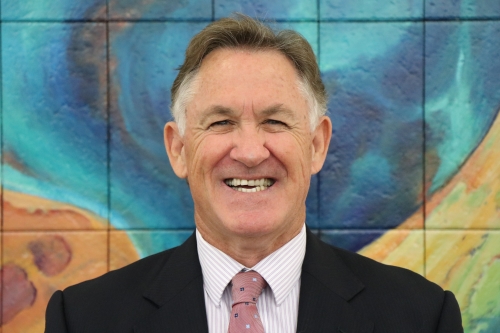 "I would like to see the city take advantage of the impending gas supply and the NBN services."

Register of Interests of Councillor and other related person(s)

Mount Isa has been my home since arriving as a youngster in the late 1960s and I have loved the city, the people and the district ever since.

I met and married Catrina here and together we had four children, two of whom have also made Mount Isa their home. They all have children of their own as well, and in all we have six grandchildren.

A qualified electrician, I owned and ran an electrical contracting company during the 1980s and early 1990s which saw me providing services to the residents, business, government, and industry in Mount Isa and the greater North West.

I sold the company in 1992 and moved into the community sector for the next 20 years as CEO of Mount Isa Skills Association delivering community, social, employment and training programs and projects, again across this fabulous North West Region. I managed and delivered hundreds of community projects during this time and many of these are still relevant today as sporting groups, local councils, and community groups still benefit from their additional infrastructure.

I hold post-tertiary qualifications in Community Sector Management, and also post-graduate qualifications in Innovation and Entrepreneurship from the University of Adelaide, and I am also a graduate of the Australian Institute of Company Directors.

In April 2016 I was elected a Councillor and Deputy Mayor in the highly successful Joyce McCulloch Council until 2020. Highlights of this term were the reigniting of the economic development agenda and the significant improvements in the facilities and assets throughout the city. Examples are the New Isa Street Bridge, new tourist RV parks at Frank Aston and George McCoy parks, the modernising and massive overhauls of the Waste Management Facility, and the Animal Management Facility, Splashez Aquatic Centre, and the Civic Centre.

I presently love keeping busy as a Non-Executive Director and Chairperson of North and West Remote Health Ltd. (formerly a Medicare Local), a position to which I was elected in 2012.

I was an elected executive director of the Sydney-based national employment company Job Futures Ltd. from 2007 to 2009.

In 2006 it was a great honor to be awarded the Mount Isa Citizen of the Year for services to the community.

In my spare time I have become qualified in design and construction of solar energy systems.

Being re-elected for a second term I would like to see the success continue and already there are a number of upgrades and re-developments underway with the floodlighting of two popular parks, the Sunset Drive and Abel Smith Parade median upgrades, and the new improved Riversleigh Centre redevelopment.

Important future projects and assets I would like to see come to fruition for the city this term are the Transport and Logistics Centre; Barkly Highway upgrade; Motor Sports Facility; Smart Water Meters installed to all users; renewal of water trunk mains, pump stations, and distribution systems; new arterial road into Healy Heights from Duchess Road; Bike Pump Track facility; and continued modernising and upgrading of popular parks across the city.